No-one has ever contacted me asking for public art as a contribution to their quality of life. They ask for pavements and potholes to be repaired; bins to be emptied; action by Environmental Health, the police or health services; trees to be planted and hedges to be cut back; housing to be repaired; planning applications to be supported or objected to; planning conditions to be observed; and many other things.

If I am ever contacted about public art, it’s in a wry, questioning “how did that happen?” kind of way.

Mostly recently it was the huge sculptures which have sprung up on Hills Road bridge, described by the artist as referring to dancing Breton villagers and “the human struggle to achieve excellence” represented by a man in a pointy hat holding up an elephant.*

Before that it was the dead tree at Trumpington Meadows; the fibreglass tents outside Royal Papworth Hospital which have frequently been mistaken as a settlement of rough sleepers; the Southern Fringe apple tree project; and the inaccessible tiled installation at The Marque. In fact, all the way back to the hemi-spherical seating at Wulfstan Way. 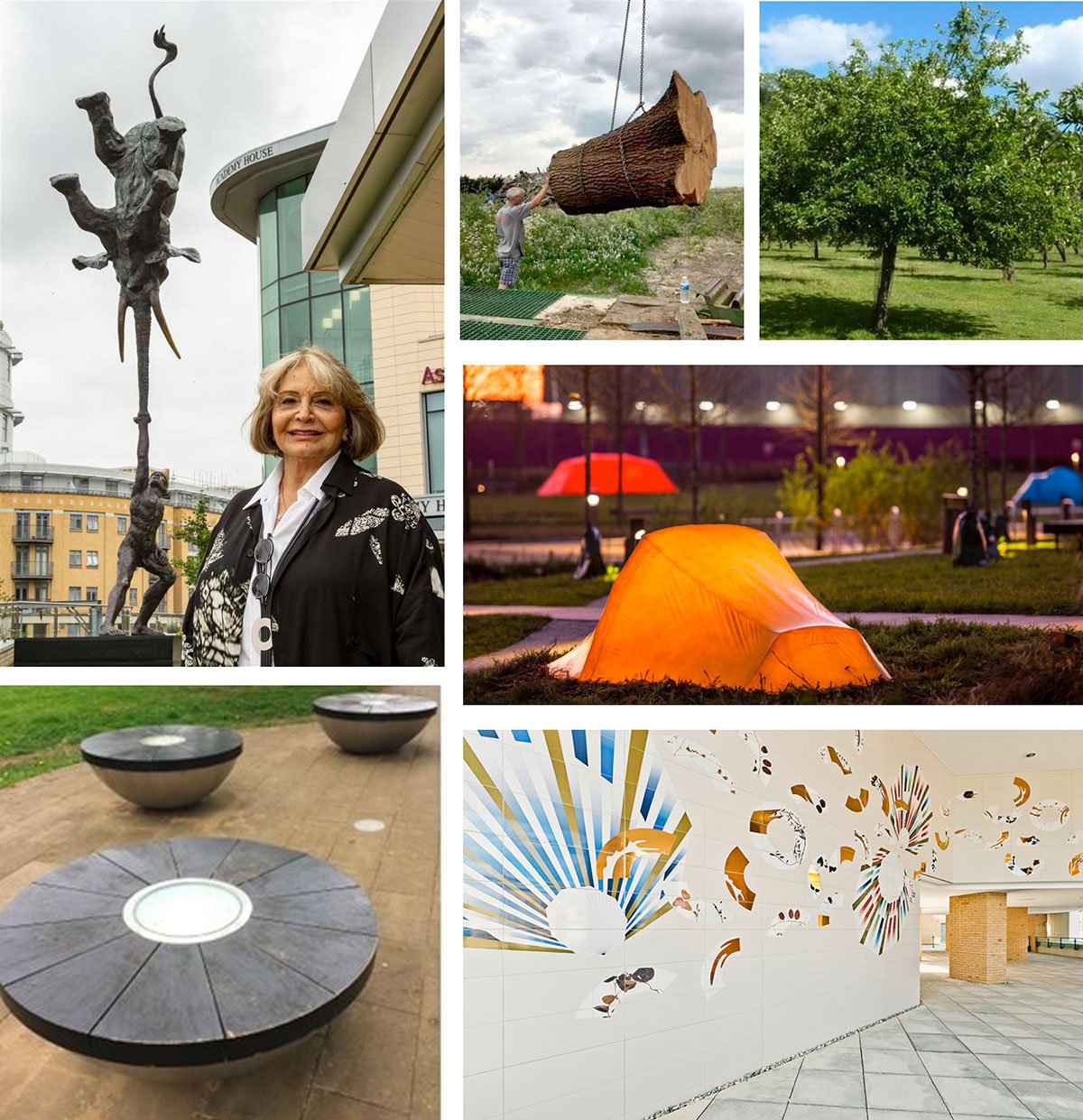 I’m not going to comment on the ‘art’ side of the equation, to avoid the risk of sounding like the Monty Python sketch: “I don’t know much about art, but I know what I like”. But I do have views on the importance of getting the ‘public’ element right.

Public art is supposed to be one of the benefits/mitigations of development, funded by S106 contributions and defined as: “New and original, high quality public art, which is accessible to the public, involves an artist, engages the community and has a lasting legacy”. However, even though the relevant Supplementary Planning Document has been in place since 2010 and has therefore had plenty of time to bed in, the practical interpretation of that requirement to ‘engage the community’ seems hazy.

I wouldn’t argue that all public art has to be instantly popular – of course there can be a role for it to be challenging, thought-provoking, even uncomfortable at times. But surely there does need to be some attempt to build public consensus and understanding if it’s to have any legitimacy?

You may have read this week about the ‘To The River’ project which is currently the subject of a consultation launched by the City Council. As far as I have been able to establish, this proposal has a budget approaching £100,000 to create a gold metal edge to a stretch of the River Cam’s bank at Sheep’s Green, yet has been launched without any prior conversations with local Residents Associations, the various Friends groups active in the area, or even local Councillors.

Any one of these groups could presumably have pointed out that Sheep’s Green is a designated Local Nature Reserve and that this intervention, far from celebrating the River Cam, would in fact threaten the natural landscape and views which are so highly prized for their intrinsic qualities.

At least a couple of respondents have suggested that a more sensitive and appropriate way of celebrating the river would simply be to install more benches so more people could sit and enjoy it.

I’m also reminded of the fundraising campaign started by Carter Jonas back in 2016 to restore Hodson’s Folly, the classically-inspired but now tumbledown ‘Swimmers’ Temple’ near the Sheep’s Green bridge. The last donation was made 28 months ago, when the campaign had reached only 25% of its £16k target. I’d love to know what happened to that aspiration. Has it just quietly been shelved?

But I think it’s also worth reflecting on the bigger picture for a moment. We take developers’ money to offset the damage they do. Our chalk streams, including the Cam, and the ecosystems which depend on them, are incurring huge damage from over-abstraction and pollution. And yet we choose to neither restrict the causes of that damage, nor repair the damage that has already happened, but instead concoct some arbitrary ‘celebration’ of what’s left.

I understand that the terms of the ‘public art’ funding pot means that it needs to be spent on public art and cannot be diverted towards other purposes, no matter how pressing or worthy the need. But ‘To the River’ seems like the most obvious example yet that we do not have a robust and credible process for defining how these highly visible interventions in the fabric of our city take place.

As things stand, it’s yet another example of things being done to, not with – or better still by – residents. And I don’t think that’s good enough for ‘public’ art.

*After this blog was posted, the Public Art Officer at the City Council helpfully clarified that the Hills Road sculptures “have nothing to do with PA (public art) policy. The Landowner has installed them”. This just then prompts another set of questions about how they got signed off – a very quick scan of the Planning Portal doesn’t throw up any applications. Any clues?