We need to give people better transport choices. And fast.

‘Slow travel’ is all the rage in the Sunday colour supplements, but has less of a pull when balancing up how to get from Cambridge to Huntingdon on an overcast Wednesday morning in October. We know there’s an urgent need to reduce the number of journeys made by private car, which means making the change a realistic option for more people. So it seemed like a good idea to remind myself what the bus journey was like.

Unsurprisingly, the trip showed how much more investment and imagination is needed in public transport.

The first thing to say is that I acknowledge that I’m lucky enough to have a choice about how to travel. That’s not just about access to a car, but also about having the time to use other methods. Drive time is (in theory at least) about 30 minutes; public transport options take at least twice as long.

Once I decided to take the bus, I had to choose between a Guided Busway service (which needed a change in St Ives) or the through service via Cambourne and Papworth. I opted for the latter, the X2 run by Whippet Bus, the ‘X’ rather optimistically standing for ‘Express’: 1hour 15 minutes, for a journey of 20 miles. 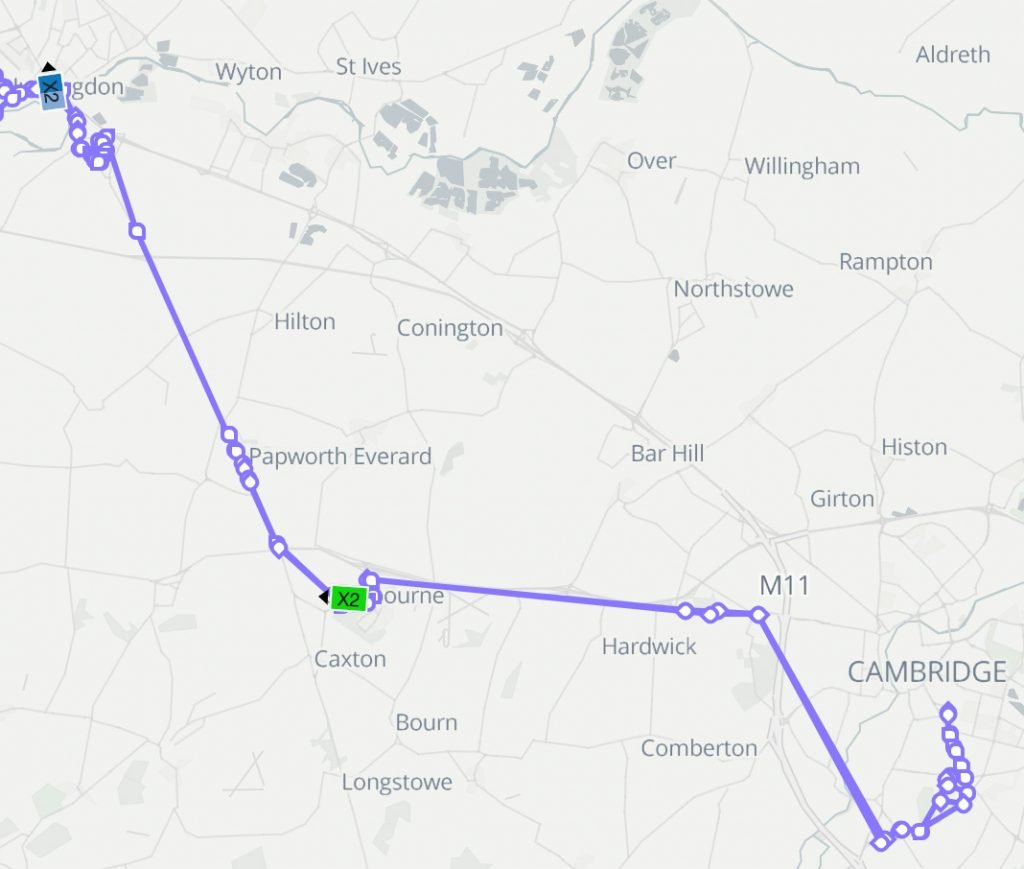 I cycled to pick up the service at Cambridge Railway station, because that fitted better with my plans for later in the day. This of course necessitated a weighing up of where it was safe to leave my bike parked if I wanted it to still be there when I got back. Rates of bike theft around the city are escalating and the 3000 space CyclePoint is one of the most notorious hot-spots for this. Neither the police nor Greater Anglia follow up theft reports. I now refuse to leave my bike there.

I’ve commented before on the failures of the station redevelopment to deliver the high-quality integrated transport interchange we were promised as part of the Brookgate masterplan: bus stops distributed around the corner from the station exit, while taxis take pride of place immediately outside; and cyclists and pedestrians equally disadvantaged in a ludicrous ‘shared space’ experiment.

Sadly, we’re unlikely to get any major re-arrangement of space around the station soon. But what really rankles is that we can’t even get the little things right. According to the Whippet Bus timetable, I was to join the service at Stop 8. Do you think there’s a clearly visible Stop 8 sign on both sides of the bus shelter? Of course there isn’t. It’s just another small but telling indication of how little thought is given to users’ needs and the respect they can expect. 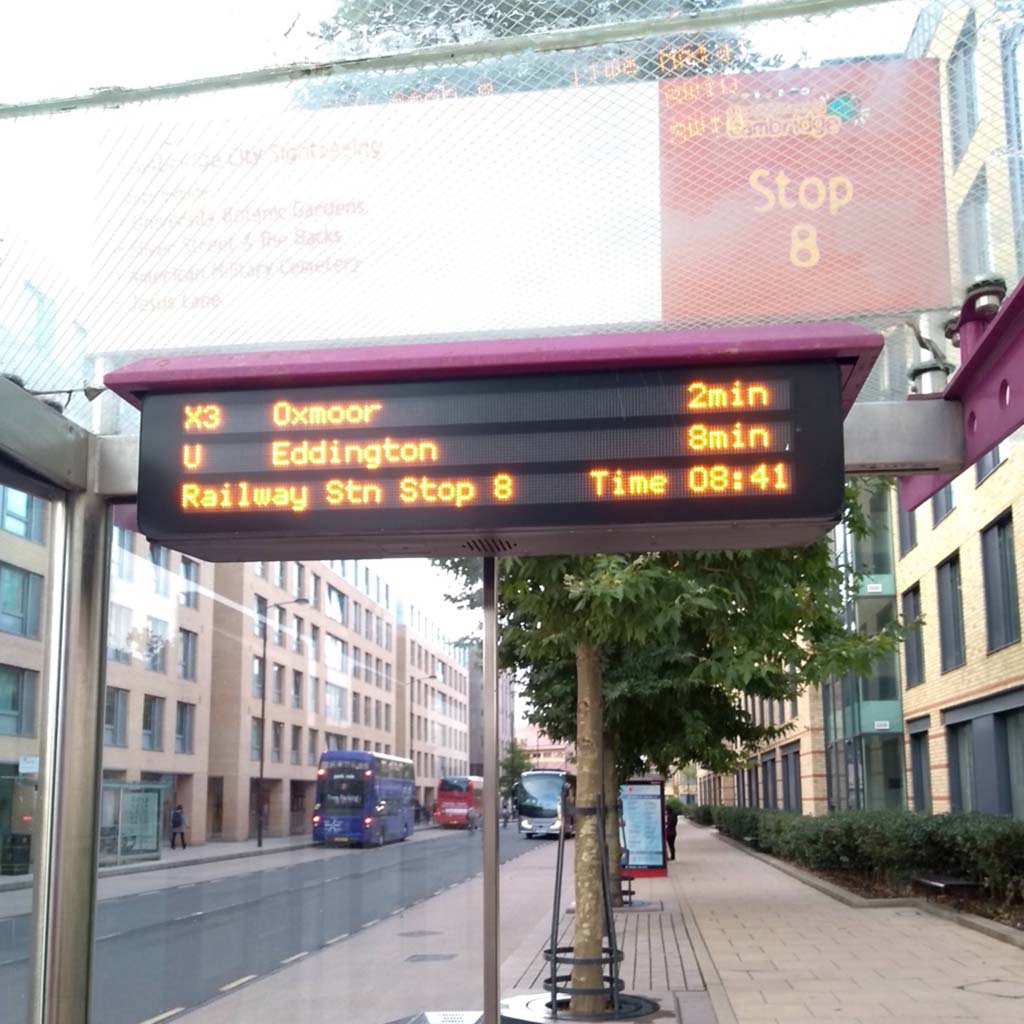 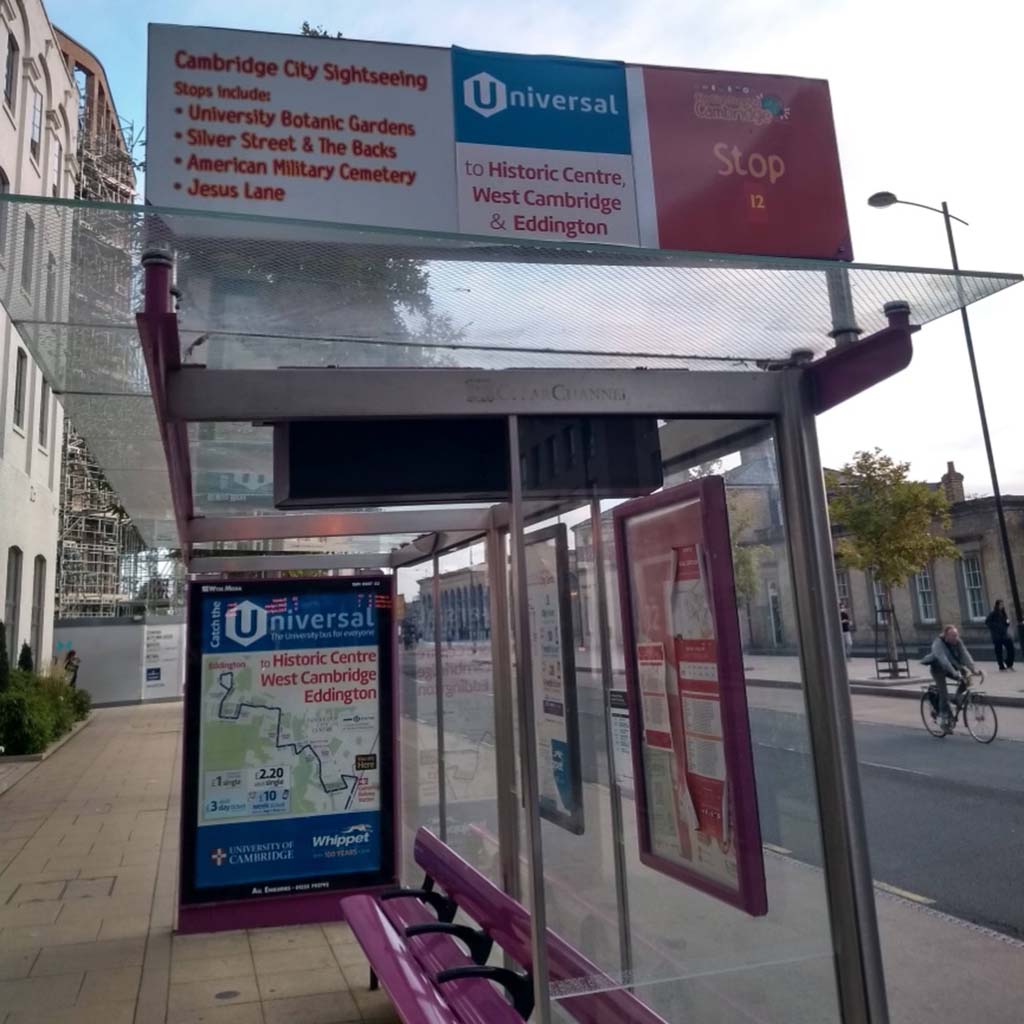 A return ticket was £7, which I thought was reasonable value. However, to start with I was the only passenger on the bus. We picked up another couple in the city centre and then the three of us headed out into the countryside.  At no point were there more than four passengers on the bus until we reached Godmanchester, which was after 9.30am and so accessible to holders of free bus passes.

Several free pass users got on as we wound our way round housing estates, and they clearly valued the service. The timetable indicates that there are only two local 478 services an hour – but if you are elderly or have limited mobility, that offers too little security that if one service is late, you won’t be stranded, so routing the ‘express’ services through the estates is a pragmatic way for the operator to supplement that. But it is also a big deterrent for anyone wanting a genuinely fast connection between Cambridge and Huntingdon.

At least the bus users of the older Godmanchester estates have bus shelters at which to wait. What was depressing about wending our way through the newer developments at Cambourne and Roman’s Edge was how few shelters there were. Thousands of new houses, thousands of new residents, but no attempt to do even the bare minimum to persuade them that public transport is an attractive option. This is the public transport infrastructure in the central shopping area of Cambourne: 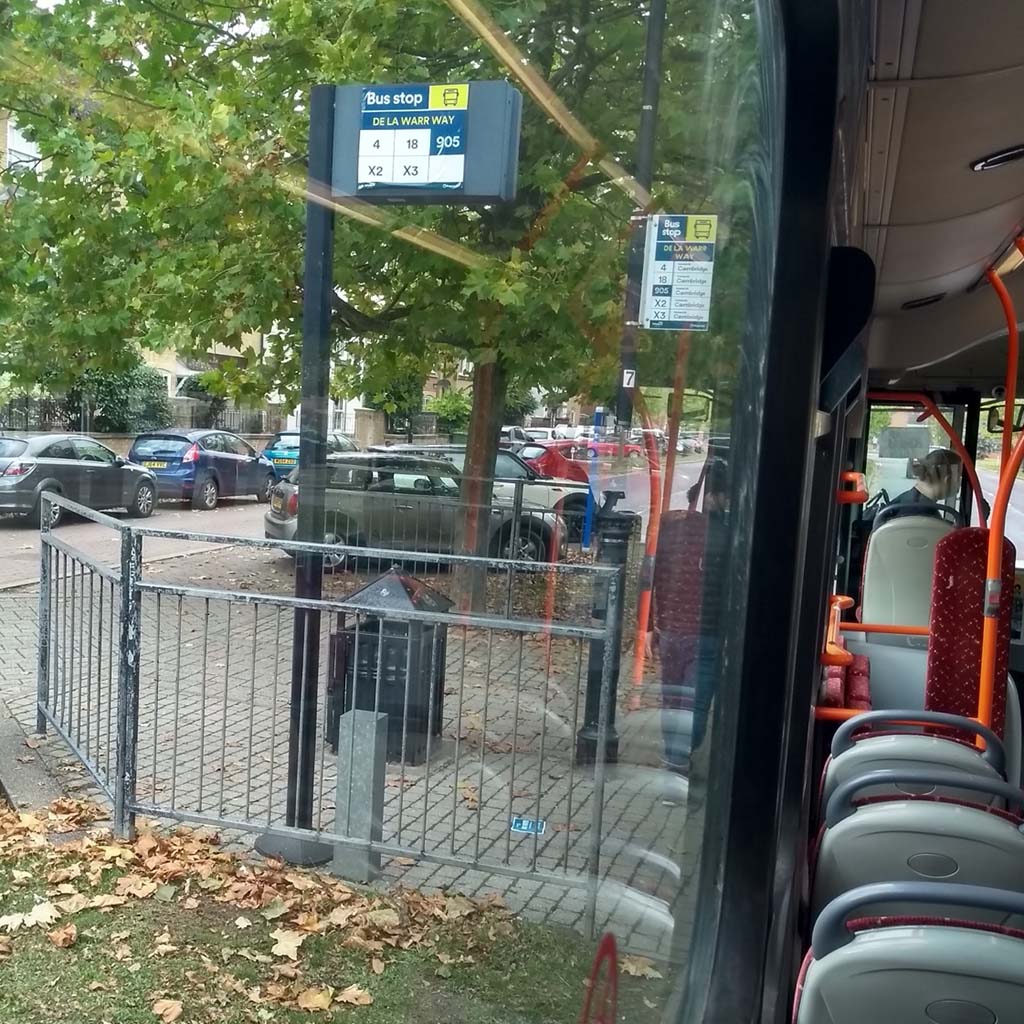 The vehicle itself was equally unlikely to persuade anyone that bus travel is an attractive, let alone aspirational, option. Yes it was clean inside, but also noisy, especially on the rural sections where it got up speed. There were no visual or audible ‘next stop’ announcements, let alone value added features like wifi. Given all of this, it would be very difficult to use your time in an economically productive way – and given that the journey takes twice as long as by car, if that matters to you, then of course the car is the only rational choice.

This matters, because the justification given for encouraging growth in Cambridge is that it will diffuse out into the wider geography of Cambridgeshire. This is the central tenet of The Cambridgeshire and Peterborough Independent Economic Review (2018) commissioned by James Palmer, then Mayor of the Combined Authority. Huntingdon and surrounds are highlighted as an obvious location to accommodate that growth – but where will the new residents work, and how will they travel around? 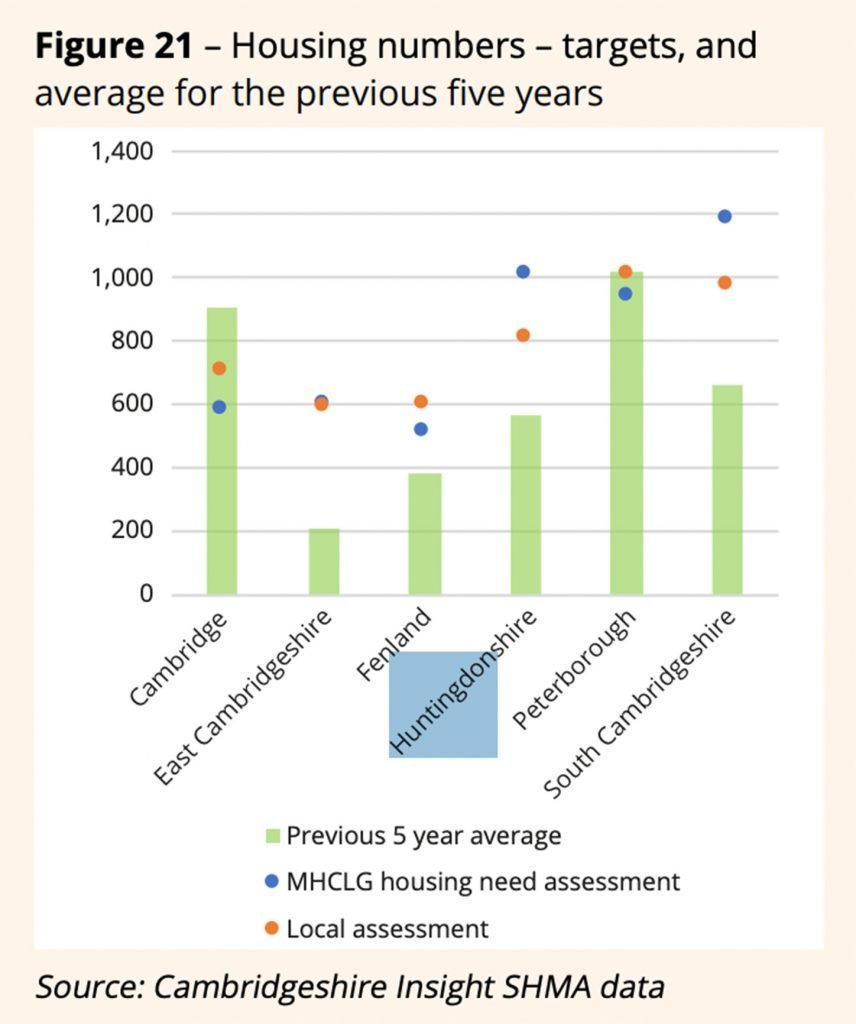 Huntingdon town centre has beautiful bones but it has to be said that it felt like it was struggling when I visited.

CPIER argues for both a market town masterplan to reinvigorate places like Huntingdon as successful settlements in their own right, and significant public transport upgrades led by the Combined Authority. Both of those are policies I’d love to see delivered, but I remain sceptical about the likelihood of them being achieved in any reasonable timeframe because of all the governance and financial barriers I’ve detailed in previous posts.

If they cannot be achieved though, what then? The city and the region’s carbon budgets continue to sink under the weight of private vehicle journeys for both employment and leisure purposes to Cambridge and South Cambs. Air pollution increases. Gridlock.

Remember that the upgrade of the A14 between Huntingdon and Cambridge completed last year was funded to the tune of one and a half billion pounds. Where is the equivalent ambition and funding to get people out of their cars? 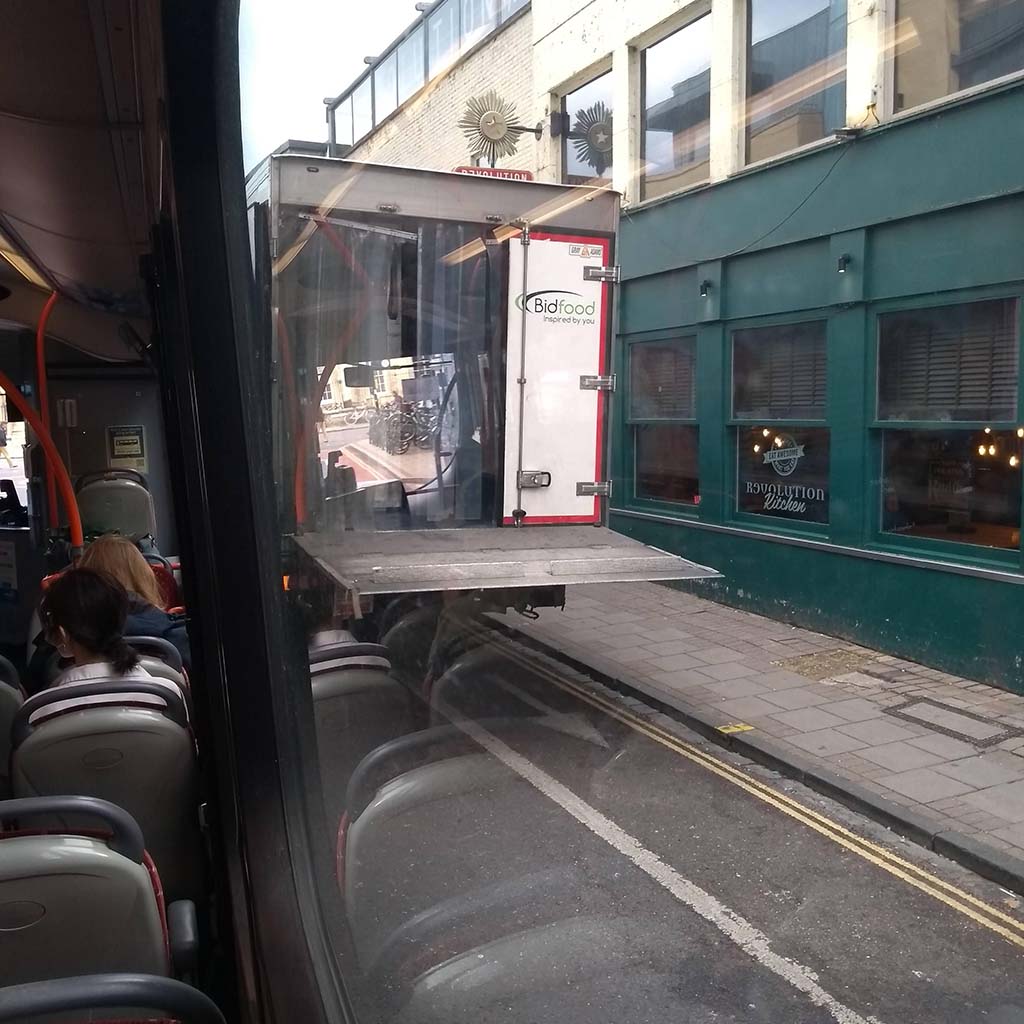 My slow homeward journey was delayed by a lorry parked on the cycle lane at the junction of Downing Street and Regent Street (above). My bus couldn’t squeeze through between the Park and Ride bus in the lay-by outside John Lewis and the illegally parked lorry. Cyclists were using the pavement in both directions to get round the blockage. The enforcement officer in attendance couldn’t get the driver to move. I concluded that – even having been issued a parking ticket – parking at that pinch-point immediately outside his destination was the economically rational choice for the driver.

We need to give people better choices. And fast.