Multiple layers of government (City Council, County Council, Greater Cambridge Partnership, Combined Authority) all bang the gong for growth but haven’t got a clue how to solve the problems it is creating. On Thursday morning, a young physiotherapist on her way to work, Anna Garratt-Quinton, was killed at Addenbrooke’s roundabout. We need to talk about this.

I knew what I was going to write in this week’s blog – a report on the application to build 40 short-stay apartments at 11 Queen Edith’s Way, the site of the former retirement home, the Hollies, which was heard at Planning Committee on Wednesday.

But then on Thursday morning, a cyclist was killed at Addenbrooke’s roundabout, a young physiotherapist on her way to work, Anna Garratt-Quinton. This is the second serious accident to involve a cyclist in recent years on the doorstep of the hospital.

And on Friday, I received an email from a staff member at Addenbrooke’s, asking me as a City Councillor, what I was going to do “to make cycling in and around Addenbrooke’s safer”.

Writing my reply was dispiriting and upsetting. The truth is that the link between the planning system and transport delivery is broken.

The truth is that multiple layers of government (City Council, County Council, Greater Cambridge Partnership, Combined Authority) all bang the gong for growth but haven’t got a clue how to solve the problems it’s creating.

The truth is that the City Council has no direct power over the allocation of space in the streets of this city.

We don’t yet know the circumstances around this accident but we do know that the redesign of the roundabout in 2017 (both the process and the outcomes) was heavily criticised by local residents and by CamCycle. This was yet another big and disruptive project in our neighbourhood. Did it really serve no useful purpose other than ticking a box on a list of Campus planning obligations?

Having lived on Hills Road for over 20 years, I have had ample opportunity to watch traffic volumes in the area grow relentlessly. And when walking or cycling around the area, I have had ample opportunity to experience the damaging and sometimes dangerous effects of that growth. For how much longer will the Powers-That-Be insist that it’s possible to keep cramming a quart into a pint pot? There will be 30,000 employees at the Campus by the end of this decade – now it’s suggested we can add yet another 10,000 by 2041.

What could possibly go wrong? 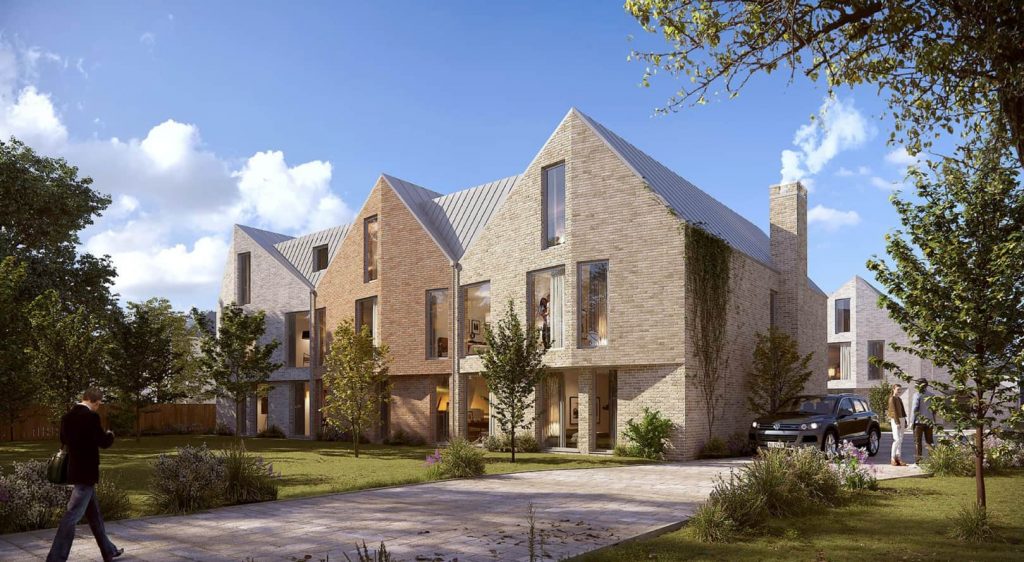 By the way, if you want to know more about the Queen Edith’s Way planning application (shown above), do read the write up in the Cambridge Independent by the new Local Democracy Reporter, Hannah Brown, and you can read the full text of my speech to Planning Committee below. The Planning Officer’s report makes it clear that they see no problem with vehicles from 40 apartments entering/exiting the premises across a shared use path used extensively by cyclists and pedestrians on their way to school or work.

Of course they don’t.

I’m grateful for this opportunity to speak at today’s meeting and to draw councillors’ attention to aspects of the application which I believe need clarification, and which lead me to urge you to reject the application.

Firstly I would like you to consider the appropriate balance of two policies in the 2018 Local Plan.

The officer’s report refers to Policy 77, Development and Expansion of Visitor Accommodation. Just to recap, Policy 77 states that high quality accommodation will be supported “at Cambridge Biomedical Campus (including Addenbrooke’s hospital)”. In para 8.5 of the report under consideration today, the officer suggests that 11 QEW is close enough to the Campus to qualify for approval under Policy 77.

This interpretation is further supported by Policy S/CBC in the new Local Plan First Proposals. These rightly now require the Biomedical Campus to utilise its own land efficiently to meet its needs and specifies:

“Given the existing piecemeal development on the biomedical campus, any proposed release must contribute towards improving the wellbeing of campus users and surrounding communities, as well as addressing the spill over impacts on individuals and communities of this intensive employment location.”

The clear intention of this provision, to ensure that the Campus no longer pushes out its negative externalities into the surrounding residential neighbourhood, reinforces the primacy of Policy 17 over Policy 77 in relation to this application.

Secondly, I would like to draw councillors’ attention to the impact of this development on the character of the local neighbourhood. The section of Queen Edith’s Way between Hills Road and Fendon Road roundabout is characterised, as the officer’s report describes in para 8.2, by “predominantly early-mid 20th century, 2.5 storey detached houses”; and while it has seen an acceleration in conversions of these family houses to more modern developments, including flats, over the last decade, it still retains its residential character.

However, the application under consideration today is incompatible with this residential character, in terms of both scale and usage type. The plots on QEW which have been redeveloped as flats have a maximum of 15 units for permanent residents, vs today’s proposal for 40 short-term occupants of aparthotel rooms. This is a very different proposition for which there is no precedent in the area.

Finally, I’d like to make a couple more points which may not been apparent to councillors who do not have detailed local knowledge:

1. the entrance/exit to this development is not just crossing a pavement. Queen Edith’s Way is a heavily-used shared use path, frequented by hundreds of cyclists accessing local employment sites, including the Biomedical Campus, and education sites including Netherhall School, Long Road Sixth Form College, Cambridge Academy for Science and Technology and Trumpington Community College. I’m disappointed that the comments from the Highways Authority did not make specific reference to cycle safety. It seems bizarre to me that officers would overlook this consideration when the County Council recently spent £2.5m on cycle safety and cycle promotion measures only 200m away at the infamous Fendon Road ‘Dutch’ roundabout.
2. anyone with local knowledge will be aware that the amenities at the neighbourhood centre of Wulfstan Way are extremely limited, for example the takeaway food offer comprises one fish and chip shop. I see no likelihood that infrastructure there could meet the needs of the occupants of 40 serviced apartments, where the apartments are only 25m2, ie only 2/3rd the size of the minimum space standard specified in Policy 50, and where there are no communal facilities on site.

So – Para 8.5 of this application states “Officers conclude that spatially the site is located in a suitable location and there are no express policies that would prohibit the development of a serviced apartment use on this site”. The fact that there are no express policies to prohibit this development strikes me as a pretty low bar to clear. It certainly does not mean that it is the right development in the right location, which is surely what this committee is here to deliver.