What a week! As a result of Thursday’s vote, I am now deeply honoured to be one of three city councillors for Queen Edith’s, serving as your representative for a three-year term.

Just in case you missed it, here’s the detailed result of the City Council election for Queen Edith’s ward. 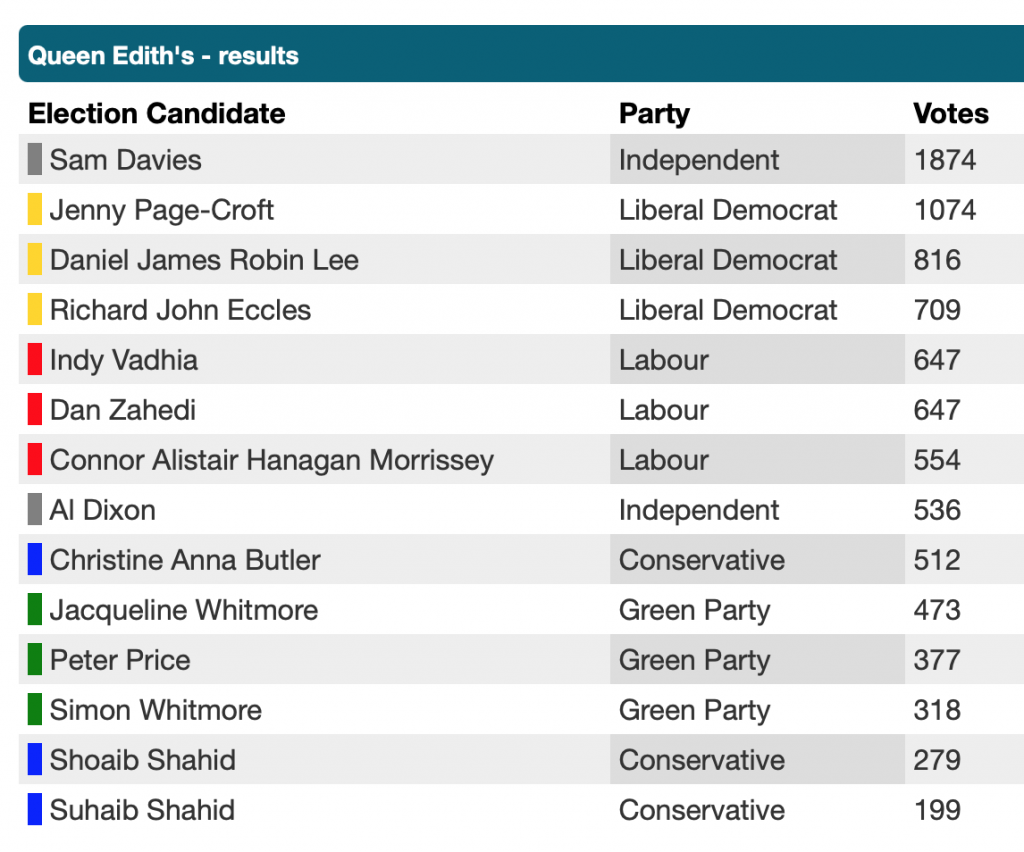 This was the largest vote of any candidate across the 14 wards in the city.

It was also the largest winning margin for any candidate in any ward.

I’ve even been told by those who study these things that “this may be the most spectacular result for any City Council candidate in 50 years”. Thank you so much!

Queen Edith’s also had the second highest turnout, at a shade under 50%, compared to an average of 42% for the city as a whole. This is testament to the huge efforts made by the Queen Edith’s Community Forum and others, to help residents understand the very unusual characteristics of this election and to promote visibility of all the candidates. I know from the time I spent outside the St James’ polling station on Thursday that many electors actually brought their copy of the most recent Queen Edith’s magazine with them when they came to vote, so that they could refer to the candidate profiles and make sure they were reminded of their preferred options.

I will of course also look to build positive working relationships with fellow councillors Jenny Page-Croft and Daniel Lee, and county councillor Alex Beckett. In addition, I’ve received some lovely messages from other councillors of all party persuasions, so I’m looking forward to the first meeting of the new Council on 27th May.

One of the biggest honours was to receive congratulatory messages from the two godfathers of Queen Edith’s politics, former mayor George Pippas and long-term county councillor Geoff Heathcock.

On Saturday morning, I talked about my hopes for a more collaborative and constructive approach in my first post-election interview with Matt Webb from Cambridge 105 radio. You can listen to it here.

In the immediate future, there will be a lot to learn about how the Council works and I’ve already been contacted by officers about the induction programme for new councillors. But it’s also very important that our community keeps nurturing its own strengths and building social connections, and over the next weeks and months I’ll be asking for your help in finding more ways of doing just that. The Queen Edith’s Food Hub, which celebrated its first anniversary on Saturday morning, has taught me so much about how we all have something to give to our neighbours and we all have something to gain from doing so. This photo of some of the volunteers celebrating captures the mood perfectly. 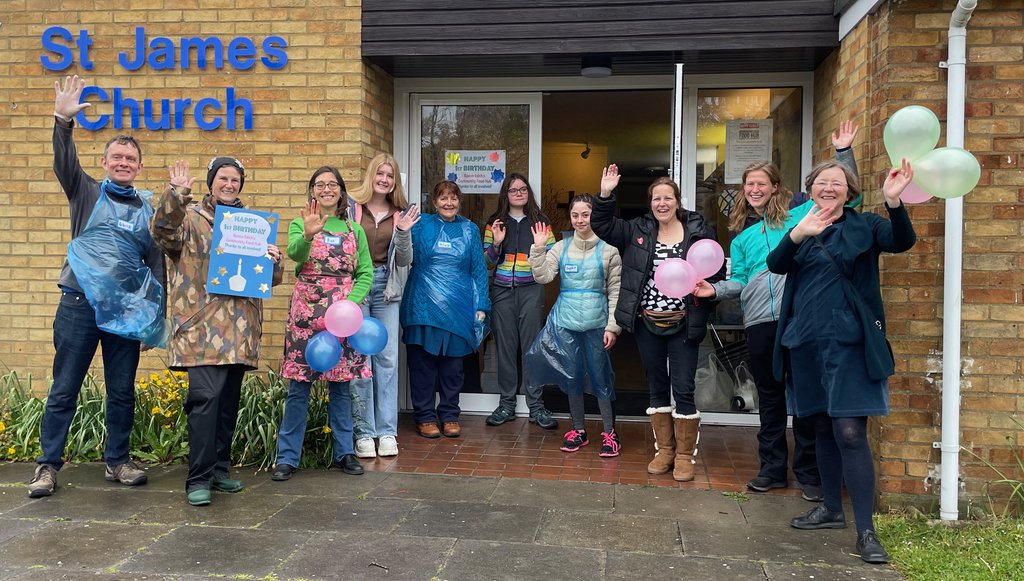 The story of a bus

Finally, I’d like to tell you a short anecdote from today’s food hub. One visitor knows that a young visitor is keen on vehicles, especially buses. They’ve talked in the past about the Citi 2 on Wulfstan Way while they’ve been queuing for the hub. Today the first visitor brought a toy bus which a neighbour had been disposing of, as a gift for the other visitor. It has working lights and sound – it’ll be much loved.

These are people who a year didn’t know each other, but now they do, they see each other every week and they value that friendship.

It’s such a simple story, but for me it epitomises how, by coming together, everyone has something to give and something to gain that they maybe didn’t know about before. There’s so much more we can do to look after each other, and so much we can gain in the process. All aboard the community bus! 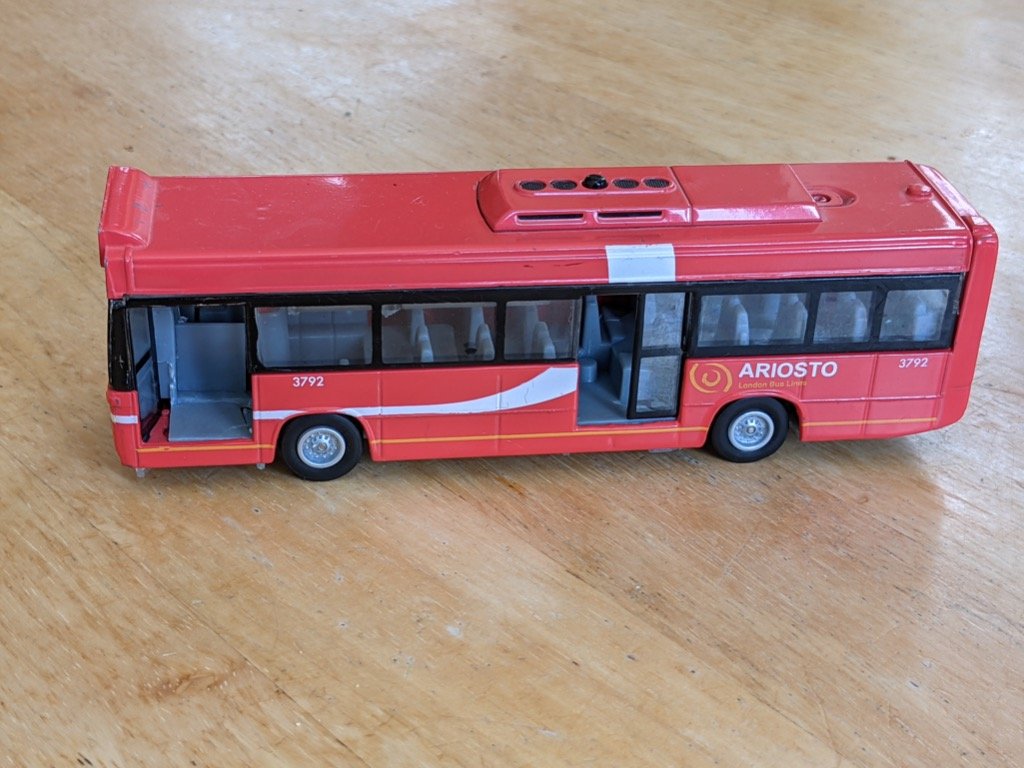 There’s a news story about the elections across the city by the Cambridge Independent here.

I will continue to publish a weekly update from now on so you can read about what I’ve been doing, as part of my commitment to transparent and unbiased communications. Please spread the word and do get in touch if there’s something I should know about: 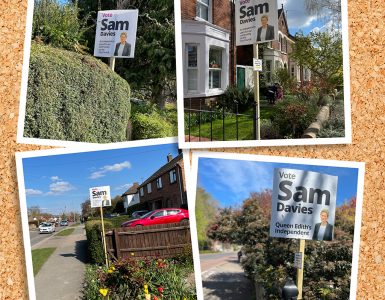