I hope you are enjoying this Easter weekend.

My team of supporters have been out this week delivering my second leaflet, which I hope all my Queen Edith’s readers have received by now. You can also read it online here. I’ve already had some lovely positive emails in response, and also some thoughtful feedback – both are welcome!

It’s challenging to strike a balance between the detailed policy explanation, which some residents really value, versus the need to communicate basic information (about what the City Council does and what an Independent councillor is) to others who are perhaps engaging with local politics for the first time. Hence I thought it might be helpful to share my responses to a couple of key questions here.

What is my take on any further expansion of the Biomedical Campus, prompted by its recent launch of a ‘conversation’ about how to achieve what it describes as “sensible” growth?

I’m very familiar with the economic arguments in favour of ‘knowledge economy clusters’ (I’ve contributed to a book on that topic!) but I think the Phase 2 and 3 development land which was removed from the Green Belt in the 2018 Local Plan should be the final stage in the expansion of the Campus.

There is of course a near-infinite demand for office and lab space in the orbit of the Campus, which is why it has already committed all the land supply which was supposed to take it to 2031. However, it should not be allowed to further expand its footprint to exploit that demand. I also note that, while the purely commercial players on the Campus are moving ahead with their developments at speed, proposed clinical institutions are struggling to get the necessary funding (for example the Children’s Hospital) which makes me concerned about the extent to which the Campus is increasingly driven by investment interests.

Finally, I am very keen to explore how the Cambridge ‘brand’ and knowledge cluster network can evolve to be less dependent on physical co-location, enabling jobs to be created in other areas of the region which are economically disadvantaged rather than further concentration in, and overheating of, Cambridge (more on this theme below).

What is my take on the many proposed big transport schemes coming to our area (Cambridge South East busway, East West Rail, Cambridge South Station)? This question partly arises as a result of this week’s East-West rail consultation launch, and also the report commissioned by Stapleford and Shelford Parish Councils requesting the GCP to look again at using the railway alignment for the CSET busway rather than crossing the Green Belt.

These are all complex matters which deserve proper exploration, and that’s why I haven’t tried to compress them into leaflet content, but I’ll do my best to cover some key points:

I’ve been a member of Smarter Cambridge Transport since 2016 and support their proposals for supporting and improving existing bus services and cycling/walking routes rather than focussing on big infrastructure. The GCP has spent £51m of its initial £100m on consultants’ fees on four projects – the Cambourne to Cambridge busway; CSET busway; Hauxton P&R; and the City Centre Access project. Imagine the immediate difference that money could have made if redistributed towards supporting better bus services, for example.

I’ve covered my concerns about Cambridge South station at length, here for example. As currently proposed it is too small for demand and will lead to gridlock on the approach roads in Queen Edith’s. It needs a major rethink – and fast.

I’ve also written before about how I’d like to see investment in our local suburban centres (like Wulfstan Way) to enable people to enjoy ‘liveable neighbourhoods’ where more of their needs can be met locally, rather than having to travel into the City Centre to get anything done.

There isn’t nearly enough consideration being given to the cumulative impact of all these schemes on our neighbourhood and our quality of life. To take one simple example, the East West Rail consultation blithely says that as part of its scheme it will be necessary to demolish and rebuild the Long Road railway bridge. Now, set that alongside the construction of the CSET busway, the construction of Cambridge South, the ‘four tracking’ of the line between Shelford and Cambridge Station and the proposed remodelling of the Robinson Way/Long Road junction as part of the Sawston Greenways project. Any one of those would have a major impact on our neighbourhood; collectively we are looking at a decade of disruption. We need strong local representation to make sure that Queen Edith’s isn’t treated as collateral damage while all of this is going on.

As you can see, there’s a huge amount to stay on top of, alongside trying to run an election campaign. As I say in this week’s leaflet, two-way communication is at the heart of what I value and I want Queen Edith’s residents to have up-to-date access to information about what’s going on around them and easy ways of getting their views across. That’s critical to building an inclusive community in which everyone feels they have a stake.

Out and about this week

I’ve been out and about having fun this week making campaign videos and also taking part in a discussion about inequality in Cambridge and how it can be addressed, which was organised by Cambridge University’s Bennett Institute. The organisers have summarised the discussion here and you can watch the full 60 minute video here. It was great to have the opportunity to explore how Cambridge’s affluence needs to be more widely distributed across a wider section of the population and a wider geography, and that’s an agenda I’d very much want to pursue if elected, having had ample opportunity to see the impacts of the economic and social disadvantage which exists in parts of Queen Edith’s over the last year.

Apart from distributing the second leaflet, my team has also begun to put up garden boards around Queen Edith’s, aimed at showing how much widespread support there is for my campaign. Look out for them. 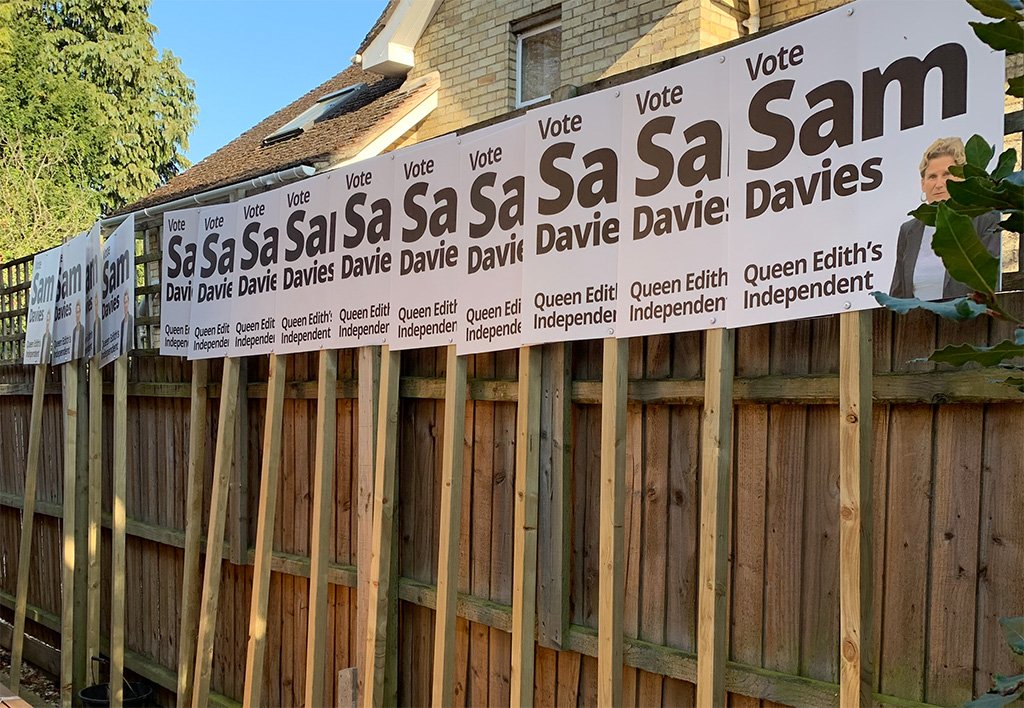 This week will bring another milestone, in the shape of the formal submission of my nomination to stand to the City Council Electoral Services team. They have a huge challenge on their hands, in terms of the number of elections happening in May, the number of candidates standing and the need to conduct everything in a COVID-secure manner. I’ve been really impressed by their emphasis on the last point; they are redesigning the process of the count from scratch in order to keep it as safe as possible for all involved. As we move towards sunnier days and the next unlocking, it’s really important that we all behave responsibly and that’s why, with regret, I will not be popping up on your doorstep for a chat. But do carry on getting in touch with your thoughts and questions.

How to support my campaign

Please carry on the conversation with your friends and neighbours about how we have a unique opportunity to set a new direction for Queen Edith’s this year. Remember, if they’re traditional party political supporters, you can remind them that they have three votes for city council, and so can vote for an independent and someone from their party!

If you’d like to show your support, the back cover of the most recent leaflet makes a great window poster. If you’d like a fresh copy, just reply to one of my emails or contact me here and I’ll happily drop off another copy. Also, I have some stickers which – if worn on a coat or jumper – seem to be great at kicking off conversations while out and about. Again, let me know and I can drop one off.

My campaign videos will start being promoted through social media this week. You can follow me on Twitter here and on Facebook here. As many ‘shares’ as possible would be really appreciated. Alternatively, I’ll round up the first set of videos in next week’s email. Have a great week everyone!