Thank you for your thoughtful comments and emails on last week’s post. Today I’d like to go into a bit more detail on a topic I mentioned a couple of weeks ago – the current consultation on the future of the Market Square – and also extend the conversation wider, to think about what’s sitting behind the proposals and what that might mean for residents in the future.

As with all things, the advice to ‘follow the money’ applies here. Newly elected councillors were recently given a presentation on the council’s finances. As you might expect, the message was one of “significant challenges ahead”, with the need for around £5million in cost savings over the next five years from the £100million spent on services.

This is set in the context of council climate change commitments, leading to increased spending on retrofitting council housing and commercial property; and potentially reduced income from the central car parks, if measures to keep private vehicles out of the city are successful.

So you can see why this would make the council keen to leverage its assets to generate additional income, both directly through rental fees from events held in its public spaces, and indirectly through growth in business rates achieved by supporting successful businesses in the local area. And that’s where the role of attracting tourism comes in.

The importance of tourism 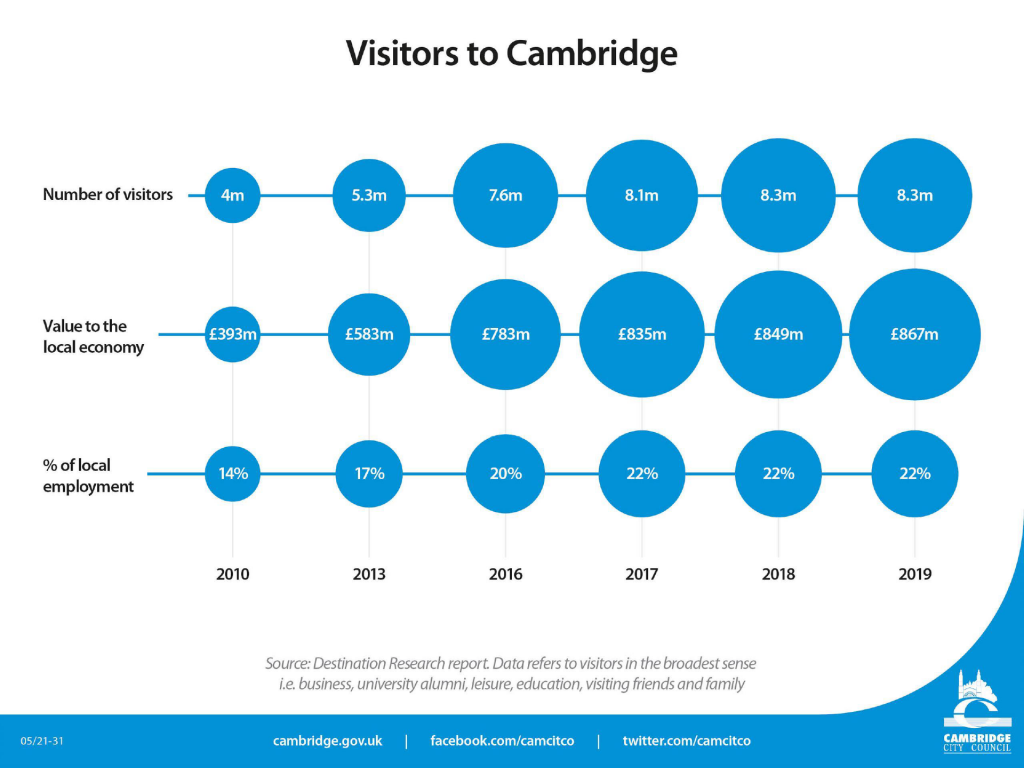 Another recent presentation to councillors brought home the huge increase in the importance of tourism to the city in recent years. As you can see, both the number of visitors and the financial value to the local economy have more than doubled in a decade.

Obviously we don’t yet know what a post-Covid era might hold, particularly for prospects for international tourism, but an item is being presented for approval by Environment and Scrutiny Committee on 1st July regarding the revival of Visit Cambridge, a ‘destination management organisation’ designed to drive tourism to the city.

The levers that many cities reach for when competing for the tourist £££ are based on persuading visitors how “buzzy” “vibrant” “dynamic” “creative” (supply your own cliches) the city is. Bizarrely, this leads them to adopt almost identical strategies. For example, the ‘Cows about Cambridge’ trail of decorated fibreglass cow sculptures, which is soon to be launched, is run by the same arts organisation which is also this summer overseeing elephant trails in Luton and Worcester; rams in Derby; hares in Southend; and rockets in Leicester.

In other words, there’s a formula that cities feel they need to apply to demonstrate these valuable qualities of vibrancy, dynamism etc, but that formula actually makes it harder for them to retain their own unique qualities!

Academics have noted this as a marketing problem: “The more attractive cities become as tourism destinations and the more experienced tourists become in consuming the experience of urbanity, the more difficult it is for cities to distinguish themselves in an increasingly crowded marketplace.” (1)

But it’s also a big problem for the residents living in those cities. In 2019, the City Council acknowledged that the pressure of increased tourism on the city’s infrastructure is leading residents to stay away from the city centre. And now we have the market consultation…

This consultation, which runs until 7 July, asks for views on the City Council’s proposals to “transform the design, appearance and day, evening and night time use of this key city centre space, whilst being sensitive to its rich heritage value; and safeguarding the future of its daily local market”.

It has been widely criticised by the market traders. Among other things, they say that the new design for the market stalls (which have yet to be seen in the flesh) won’t be robust in bad weather, and that the proposals for regular events in Market Square will force them to shut their stalls early or perhaps not be able to trade at all in the run up to Christmas. They also very clearly state that they do not feel their views have been given adequate representation in the ‘stakeholder’ discussions until now.

The majority Labour group on the City Council, who are supportive of the proposals, respond that the proposals will “secure multi-million pound capital investment” which will improve conditions for the market traders as well as creating a space “befitting of the city’s profile and reputation as an international visitor, university and business destination.” Exec Cllr Rosy Moore spoke on the subject at last week’s Council meeting, and described the counter-proposal of a more modest refurbishment of the Market Square as a “missed opportunity”.

I’m sure there will be a wide variety of views on among residents. As ever, it’s important that people understand what’s going on and how they can have their say on this issue and I hope I’ve added to that here.

However, I also believe it’s important that people develop a deeper understanding of the forces operating on the council’s finances and how these shape the decisions which are taken. We are told that growth – be that of tourism, housing or employment – brings financial benefits to the city, including much-needed revenue to support council services. But we all know that growth comes at a cost to the environmental and community life of the city.

Are we striking the right balance? And whose interests are being prioritised? We are going to return time and again to these themes.