As a councillor I now receive the Local Government Association’s monthly publication, ‘First’. In October’s issue, there’s an article on the importance of councils building a strategic narrative: “a single compelling story created from different elements of information from across a complex organisation … a fundamental element of the organisation’s communication strategy”.

This has prompted me to think about narratives in relation to the ‘Greater Cambridge Local Plan: First Proposals’, a document which is being discussed at this evening’s City Council’s Planning and Transport Scrutiny Committee, prior to the launch of a public consultation on 1st November.

The document and the consultation will form the starting point for the new Local Plan, covering the jurisdictions of both Cambridge City Council and South Cambs District Council, now referred to as ‘Greater Cambridge’. The Local Plan will guide development in the area until 2040.

As I mentioned in last week’s blog, there is a huge volume of material to consider – 395 pages in the main agenda pack plus thousands of pages of supporting material. Today I’m going to attempt to tease apart just one element of this complexity: the relationship put forward between jobs and housing numbers.

On page 22 of the Plan (page 66 of the Committee documents), it says “Over recent years, jobs have been created faster than new homes have been built and this has contributed to higher house prices”. The proposal is therefore that, in recognition of “the continuing strength of the Greater Cambridge economy and its national importance”, we should now base our Local Plan on an employment-led approach to quantifying housing need rather than using the National Planning Policy Framework’s standard method: 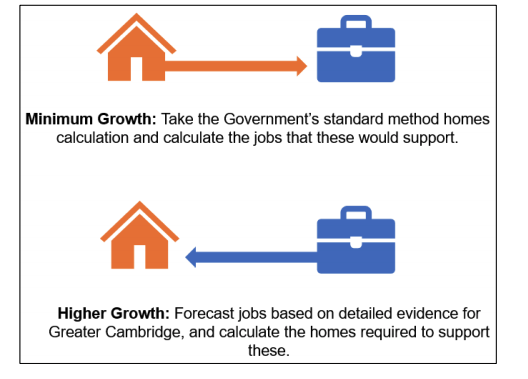 Using this employment-led approach, the ‘First Proposals’ suggests that Greater Cambridge should aim to deliver an additional 44,400 new homes between 2020 and 2041, compared to 36,600 using the standard method. Those are both big numbers but, as the First Proposals document points out, we already have almost 31,500 prospective homes either in our adopted Local Plans or with planning permission set to be delivered by 2041.

In other words the total number of additional homes being suggested on top of those already ‘baked in’ is 7,200 – plus “a 10% (4400) buffer for flexibility”. It’s illustrated like this, with each house on the graphic representing 2500 homes on the ground: 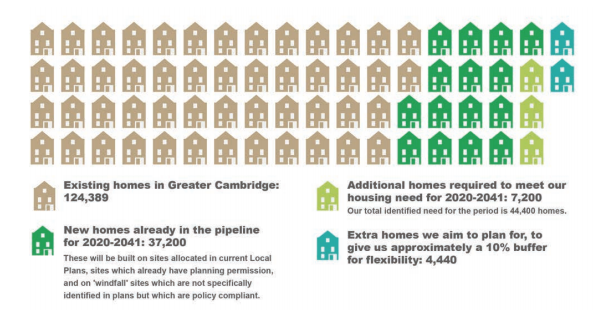 The homes we have already are shown in brown, and the new ones already baked in are shown in dark green. So we’re given the impression that the additional need (lime green) and buffer (turquoise) are relatively insignificant compared to the rest.

But what does this mean in reality? I’ve produced an amended version, using data from Cambridgeshire Insight, highlighting (in red) the new housing we’ve seen built in the last 20 years: 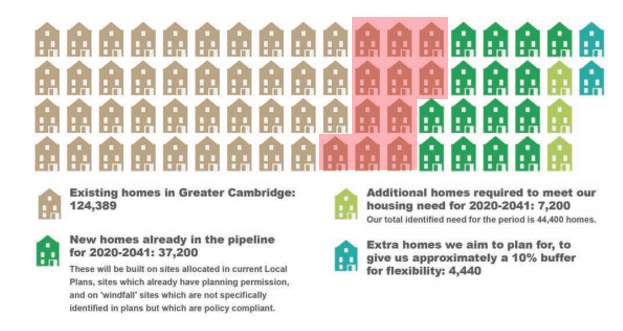 I find this quite a sobering thought, to put it mildly.

Now let’s go back to the employment side of the narrative. There is plenty of support in national planning policy for advocating housing numbers in excess of those indicated by the standard method when growth strategies are in place such as a City Deal. As we know, there are influential bodies at all levels who are vocal in their support of stimulating further employment growth in Greater Cambridge:

So it’s no surprise that the ’employment led’ approach to defining housing need has prevailed.

But of course, since Greater Cambridge has enjoyed very low unemployment rates for decades, jobs created (or, like Astra Zeneca, relocated) here necessarily involve importing workers from elsewhere. The CPIER explicitly refers to an approach of “attracting knowledge-intensive businesses which would not locate elsewhere in the UK”, akin to something you might also have seen expressed in more menacing tones, along the lines of ‘if businesses cannot meet their needs in Cambridge, then they will flee not only Cambridge but the UK’. (If someone can point me to real-life examples of this happening, I’d love to hear about it.)

So what is the story captured by the Local Plan: First Proposals?

The short answer is that it’s confused and there are chapters missing.

It maintains that housing growth has not kept up to date with employment growth, hence the city’s well-documented housing affordability problem. 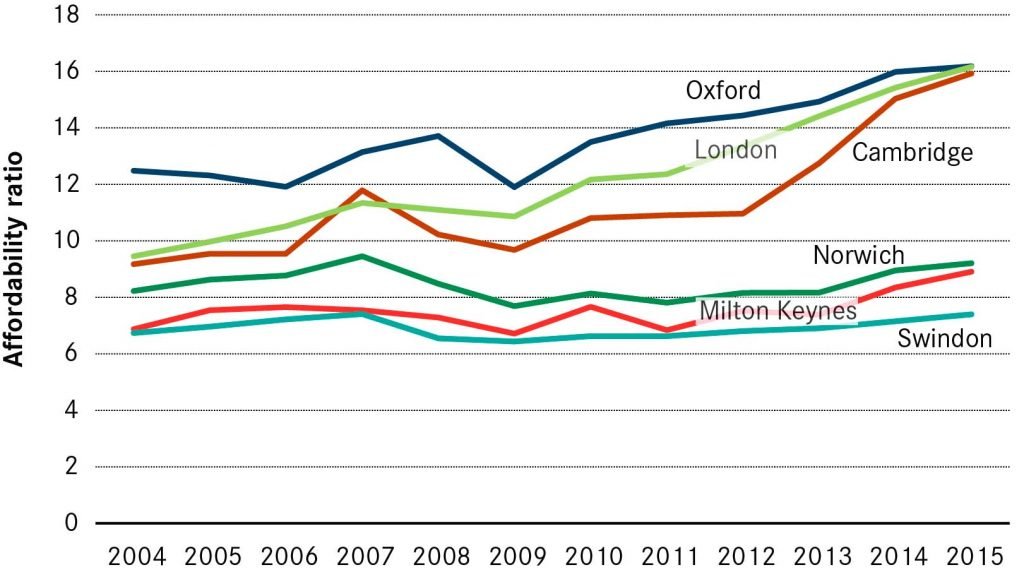 It proposes an inevitable massive supply-side housing expansion [1]; but doesn’t even mention as a possibility doing anything to moderate the employment trajectory.

On the contrary, the Greater Cambridge Employment Land Review and Economic Development Base, included in the supporting evidence, simply documents the previous decade’s staggering expansion in employment, and then extrapolates that forward, describing it as “planning positively for growth”.

The pattern is set. We are planning twice as many houses as we’ve already built over the last 20 years, yet this will still lag behind job creation.

How this fits with the national ‘levelling up’ agenda, spreading prosperity outside the south east of England, is a mystery, as is its co-existence with commitments by both councils to ambitious net carbon zero targets for their areas [2].

Sprinkle the word ‘sustainable’ as many times as you like throughout the Local Plan, but it’s still a horror story.

[1] For an explanation of why the housing market doesn’t respond to simple supply-side measures, I recommend this video by Dr Deborah Potts of Kings College London at an event hosted by the Cambridge Commons group.
[2] For a ‘long read’ exploring the relationship between planning, levelling up and climate change, try this article hosted on the TCPA website – authors include Professors Janice Morphet and Michael Edwards from the Bartlett School of Planning at UCL.