The ‘First Proposals’ for the forthcoming Local Plan suggests that ‘windfall sites’ will account for 5,300 new dwellings across Greater Cambridge to 2041. I believe that Queen Edith’s is getting more than its fair share of these, and two volunteers have been painstakingly assembling information on two of our local roads to see if this is the case.

There will be a lot of talk around the forthcoming ‘Local Plan’ over the next few weeks. Most of the headlines to date have been around the total number of jobs and houses proposed, and the locations of the 19 major sites identified for employment and housing developments: 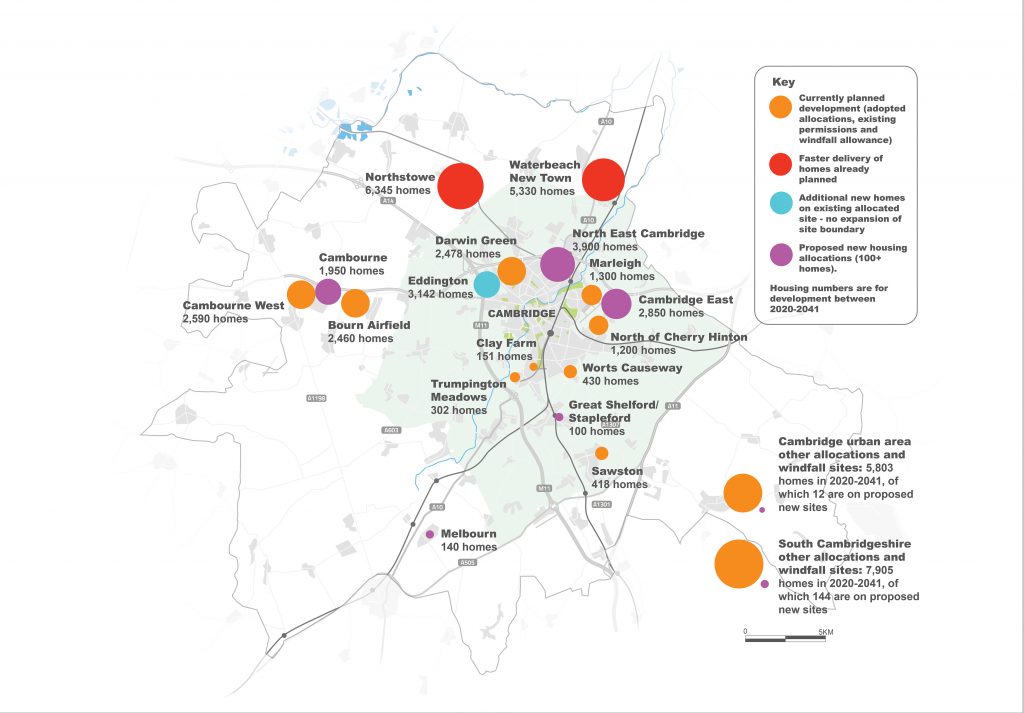 However, new housing is created not only on these specific planned large-scale sites, which will be agreed as part of the Local Plan process, but also on the many smaller ‘windfall’ sites which are applied for during the lifetime of the Local Plan. These opportunistically look to demolish, convert, extend or infill existing buildings, or change their use.

The ‘Local Plan First Proposals’ document suggests that windfall sites will account for 5300 new dwellings across Greater Cambridge to 2041 (page 34) and proposes that there should be no limit to the size of any individual windfall site within the city (page 47).

It is my hypothesis that, during the last decade, Queen Edith’s has seen a concentration of windfall sites far exceeding the average across the city, because of its proximity to the Biomedical Campus and the railway station. This is hardly a startling insight – you only need to look at the marketing materials for windfall sites such as the new flats going up at 291 Hills Road to see those messages rammed home.

However, when I asked officers working on the Local Plan whether the historical facts backed up my hypothesis, I was told that – although they have the windfall data – they have only looked at it in terms of overall numbers and not its spatial distribution across the city. They have offered to do this additional analysis for me, though this won’t happen until after the First Proposals consultation is completed.

Why does it matter to Queen Edith’s?

Well, if our neighbourhood is taking a disproportionate share of windfall sites, then there’s even more need for us to make sure that the Local Plan policies relating to preservation of local character, definitions of housing mix and density, use of garden land, etc. give us the tools we need to protect the area from inappropriate development. All of these policies contribute to the legal framework within which developers can secure permission to demolish/convert/extend/infill or change use – and we know that the policies put in place in the 2018 Local Plan do not give us enough powers to push back against the damage to residential amenity and quality of life caused by, for example, the conversion of family homes to AirBnB lets or HMOs (Houses in Multiple Occupation).

Also, remember that the developer of any windfall site which generates fewer than 14 new dwellings has no obligation to pay any S106 contribution to the City Council to mitigate the impact of the development on local facilities and infrastructure. Regardless of what profit the developer makes, there will be no additional funding for the City Council to deal with the effects of more people using the local park, community centre, etc.

And these windfall sites can really add up.

To try to get some understanding of the issues locally, I’ve been helped by two local volunteers, James and Niamh, to quantify planning changes over the last decade to two streets – Queen Edith’s Way and Mowbray Road. They’ve done some really detailed work, some highlights of which I’ll summarise here today and plan to publish in full shortly.

Examples looked at ranged from household extensions, to conversion to HMOs, and full-blown demolition and rebuild.

One of the most dramatic examples is 140 Queen Edith’s Way. In 2015 its owners received planning permission to convert it from a three-bedroomed house to one containing ten bedrooms, by building on every side. At that point it retained its status as a “Class C3” dwelling for a single household.

Subsequently (and one might say inevitably) there was an application to make it into an HMO – at the same time converting the dining room into an eleventh bedroom!

That was refused but another application specifying 8 rooms “for letting purposes with a maximum occupancy of 15 people” was approved, despite the fact that the 2015 extension had come with a statement that “the development …shall not be separately used, occupied or let”.

James’s findings point out how developers explicitly cite precedent in order to justify both the principle and the form of further conversions. For example, take a look at the extract below from the approved application for 3-5 Queen Edith’s Way. Obviously this means that, with every application approved, it becomes harder to demonstrate grounds for rejecting the next proposal, not matter how overbearing or inappropriate it might be. 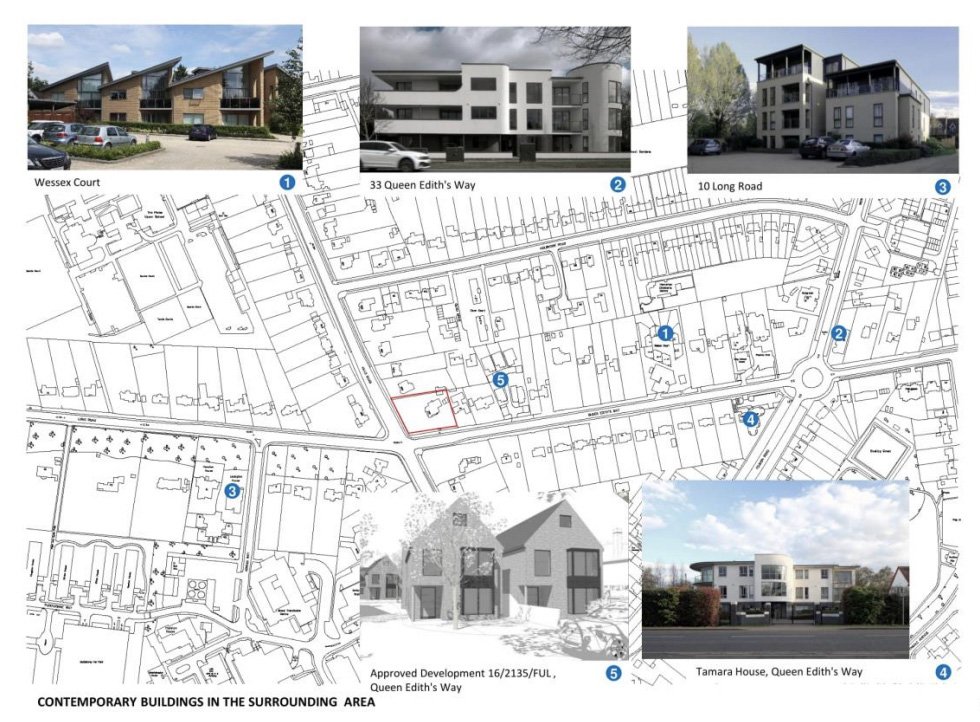 James also notes how standards have slipped over time. For example, at 92 Queen Edith’s Way, a rear garden plot was judged too small to accommodate a 2-bedroom chalet bungalow in 1998; whereas in 2015 approval was given to a 3-bedroom 2- storey house in the same location.

Niamh’s findings reflect James’s – that a number of applicants are determined to continue to submit applications until they get their desired outcome. For example, the owner of 70 Mowbray Road has made six applications over the last decade to try to build a 1 bed bungalow in the garden. The first four applications for the bungalow were refused or withdrawn. The fifth application was for a gym/games room which had exactly the same layout as the bungalow plans – and this was granted. The sixth application was to change the use of the garden/games room to a one bed flat! This was refused but the owner appealed the decision.

In total there have been six successful applications to subdivide houses, which have created an additional 14 households on Mowbray Road. Permission has also been granted for 6 garage conversions or garden rooms with toilet and shower facilities, which have the potential to be used separate living accommodation (even if a planning conditions has been put in place to notionally restrict that). So, potentially 21 new households/ rentals/ Airbnbs have been created on Mowbray Road over the last 10 years, none of which was anticipated by the planning system; none of which will contribute to S106 funds; and all of which will add to pressure on parking and local amenities. In addition they may well have an incremental effect on local character.

The conversation we need

It seems to me that this data, in this case painstakingly assembled by volunteers, is exactly the kind of information which the planning system should be collating and disseminating, so that we can have an informed and evidence-based conversation about the impacts of the current planning policy on our neighbourhood and the protections which it is reasonable to expect from future policies.

In the absence of an officer-led discussion of these concerns, I’d encourage all of you to raise these points in your contributions to the First Proposals consultation and, as ever, I’d welcome your thoughts in the comments below. And I’d like to say a huge thank you to James and Niamh for offering to get stuck in to the detail of this research for the benefit of us all.

For the pro-development lobby, Cambridge and its surroundings are space which is ripe for development. For those who live here, Cambridge is a place to which we have an emotional attachment which is intrinsic to our...